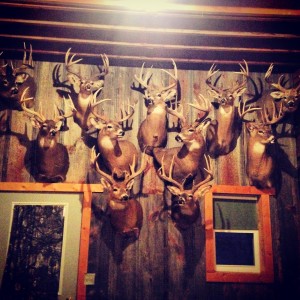 If you get a chance to hunt in South Dakota go.  Go now.  Go soon.  Go someday.  Period.  Chances are the game you want to hunt is afield in this great state and you can harvest a wall hanger.  Don’t get me wrong, growing up a hunter in Michigan I’m not discounting what we have here, but the variety of game and the caliber we saw provided for a great trip and the hope to get back sooner rather than later.

Myself, Dad, and Uncle loaded up the ride this past November and headed West.  The guides, as they had done all season, were glassing deer and were calling us with updates during our drive.  Needless to say the pedal was pressed down just a little bit further as the excitement grew.  We soon arrived at our lodge.  Any hunt camp is awesome regardless if its a wall tent or a cabin because a) it probably means you’re with friends, family, and will enjoy some hunting stories (or lies) over the next few days and b) it means you’re going hunting!  Our lodge was all you could want, but the cool thing was that it was an old refurbished grain storage building built with 2×4’s on the flat stacked two stories high.  Of course the walls were  covered in trophy deer harvested from the very property we were about to hunt.  Little did I know that less than twelve hours after I laid my head on the pillow would I be pulling the trigger.

The next morning we awoke and as you’d expect my eyes were already wide open waiting for the alarm to sound.  The morning started before day break as we loaded up the trucks with one guide and one hunter per and said our good lucks.  Before we could see horns we saw deer running the fields.  And I’m talking about +50,000 acres of them.  The guide joked as he pointed to a tree and said “See that tree? That’s our tree.  We are pretty proud of it.” It wasn’t much of an exaggeration, but the rolling hills made for some great glassing.  Again having grown up hunting in Michigan rarely do I have a lane or field more than 200 yards to look across so it was pretty cool to see the hillsides come alive through the glass.  What would look like a barren field would be host to dozens of Muleys and Whitetails if you looked in the right spots.

We watched a set of bucks not only fight but lock horns for more than five minutes.  The guide and I debated if one was a shooter or not and if we harvested one could we safely detach the other.  Just as we were making the final decision the bucks separated and ran out of sight.  What maybe topped that story was the stalk we made on another buck who when we began the walk had a full rack and by the time we got him into range had broken off one side from fighting.  Disappointing on one hand, but needless to say the rut was on and if the first fifteen minutes of day one provided this level of action we knew we’d be just fine.

I’m not sure how many times I asked the guide “Are you sure?  I’d be happy with that buck” as we continued to pass on what I’d call ‘obvious shooters’ back home.  But he knew what he had on his property and knew we could do better.  He was right.  In fact having had the discussions prior let me know that when he called out the shooter buck without hesitation or second thought he meant it.  That buck would be the one my taxidermist has in the shop as we speak.

That morning we parked the truck and proceeded to walk a fence row up a hill for a better vantage point.  If I didn’t say it before I’ll say it now, these guides not only knew their ground, their deer, and their tactics, but they knew their gear and had the best money could buy (or sponsors could give.)  That being said my glass was okay, but there were many times where I could just tell it was a buck and he was telling me the number of points, number of freckles, and the deer’s middle name with the glass he had.  So when we got to the top of the hill and we began glassing he spotted some deer as did I.  Little did I know that we were looking at different deer.  So when he said ‘just a doe’ and I said ‘man that’s a big body doe’ he quickly looked my direction and said ‘get down.’  It was on.  450 yards away stood a mainframe ten point, heavy mass, with a broken kicker from the base of his antler.  Like I said they had all the gear so although I had practiced diligently for months with the Weatherby .270 at 200 yards off sticks and felt comfortable out to 300 this shot called for a little more technology, especially with the wind (or so we thought.)  So we put my guides’ Remington 700 with the new NightForce long range scope to work, did some math and clicking and dialed it in.

As soon as I had the scope on him he started walking.  Of course you know the story – big buck walks away.  But this time he walked towards us, and some more, and some more until finally he was 150 yards away.  All the while we were dialing the scope back more and more.  He had come so close I had to re-position from laying down to kneeling and get up on sticks as he walked to the base of the hill and the high grasses and slope became a factor.  I’d like to say I was perfectly stealthy, but I bumped the stock against the sticks as I traded in gear and re-positioned thus alerting the deer.  Here is where practice acquiring your target comes in to play.  Knowing he was looking our way I placed the crosshairs on him and pulled the trigger immediately.  Before I could chamber another round for a follow up shot the buck was down.  I believe only his adrenaline and gravity allowed him to get the 30 yards he ran before expiring.

They say never pass on a buck on the first day you’d shoot on the last. Amen to that. 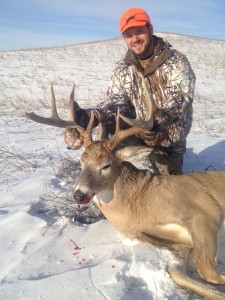 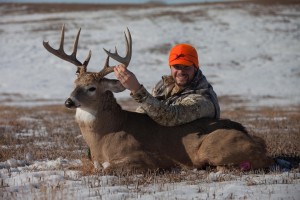