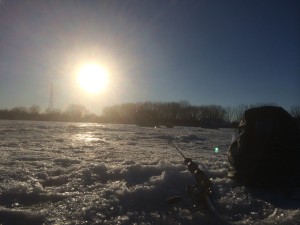 Well last week we decided to get out of town for the day, and try for some walleye through the ice.  We have been fishing around home for the last few weeks, and find ourselves wanting something bigger than a blue gill on the end of the line.  So last Tuesday, we headed to the Indy Bridge on the Saginaw River.

It was a toss up…. we wanted to go out on the bay as the fishing reports have been good.  But to make things easier, we decided to head out to the river instead.  There is a lot less involved when fishing the river vs. the bay.  We did some asking around, and we were told that guys have been getting bigger fish by the Indy Bridge so we decided to start there.  Got our lines in the water and the shanty set up.  We were marking fish, and lots of them!  I had one hit where the fish just grabbed the back of the minnow without the hook. 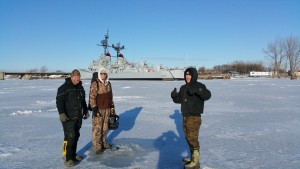 We fished for a few hours with no real luck, so we decided to go in search of better ground.  We poked holes all over the place, and again… no real luck.  At this point we decided to pack up shop and head down to First Street and see what was going on down there.  We set all of our gear back up and had a few fish move through…but no takers.  So once again we started poking holes and found some fish.  There were a good amount of fish and they seemed aggressive, but they would chase our bait coming in like crazy, and just would not bite.  We did pick up a 13″ eye, and let him go.  That was about the best we could do.  We tried every color jig and Rapala I own.  It seemed everyone we talked to was struggling as well, not just us. 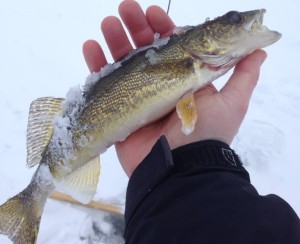 Even though the fishing was tough, the sun was shining and we were fishing….not at work.  We will get ‘em next time!  Thanks for reading.  -Kyle Happley