“It was the last day of the Ohio gun season.  Sunday, December 7th, 2014.  I woke up late, and didn’t make it to the property until around 7:30 A.M.  My brother-in-law(BIL) and I walked through the field, over the creek, past our bow stands to a ridge that overlooks a great funnel.  This funnel consists of a narrow strip of land on the backside of a pond, and our property line fence.  We setup under a tree, and it was a beautiful, crisp morning.

About 9 A.M., we saw a single deer approaching us from the pond side.  He was a nice 8 point, and my BIL was going to take him if he had the chance.  The buck was closing in fast, and when he stopped at 25 yards, my BIL shot.  The buck dropped in his tracks!

I gave my BIL a high five as we quietly celebrated.  Then, I look up to see antlers once again!  This time they were even taller antlers heading in our direction.  I noticed it was the “Split Brow 8″ we have pictures from this summer.  The beautiful buck came in… and stopped at 35 yds, and I hit him through the shoulders.  Before we knew it, he had toppled over 5 yards later.

2 bucks down within minutes of each other!  We were both in a trance-like state. 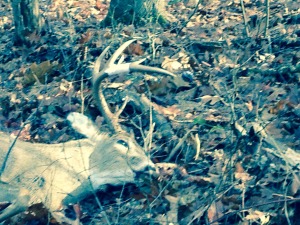 What happened next was unbelievable!  A huge non-typical was in tow of the “Split Brow 8″ I had just shot…..but we were already tagged out!  This thing was a monster, and was bigger than any deer I have ever seen alive.  It came in to about 35-40 yards and then spooked.  We were in awe.

The wind was perfect.  These bucks seemed to be hanging out together, which was strange, but it couldn’t have worked out better.

It was a great morning overall.  Just sitting on the ground, leaning against a tree with my BIL.” 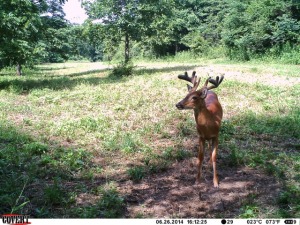 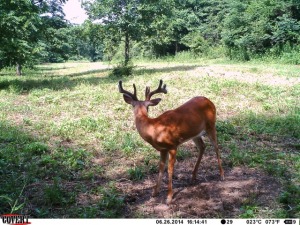 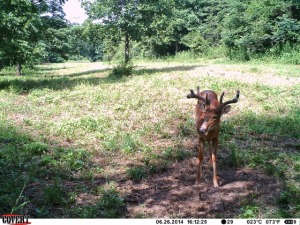 BIL with his 8 point. 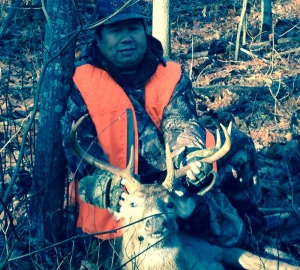