Early Season 8 Point – Drew Connects On His Biggest Buck Yet 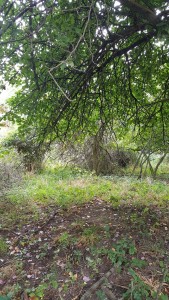 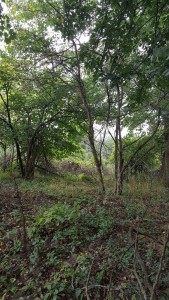 So about a week earlier, I got permission from a land owner to hunt his property in Mount Pleasant, MI…where I go to school.  That same day he drove me around, showed me some of the areas where people had been successful in the past, and where some of his other hunters had food plots set up. After that, I went on my own and hiked the property.  I knew it would take some boot rubber to find the freshest sign.

Along the south edge of this property is a private lake, with a lot of thick brush around it.  There are a few areas where some swamp starts and transitions into the wood lot.  I approached the swamp from the east that day when scouting, and just when I got to a clearing where I could see the entire swamp, I heard something get up and take off through the swamp!  About 60 or 70 yards out, I see a nice buck go into the woods.  I carefully and quietly backed my way out of the swamp, went all the way around, and started finding my way to where I thought I saw the buck go into the woods.  I made my way through the woods and found a decent spot to setup on that far side of the swamp.

The next week was busy for me, but I was able to get out and hunt on Thursday, October 6th.  I had planned on being in my spot by 4:45pm but I ran late and probably didn’t get setup until 5:20ish.  I took the longest way around that I could that day because the wind would’ve blown my scent right across the swamp if i hadn’t.  I setup in the thick brush where there was a little opening on the edge of that swamp(pictured above).  I just sat on the ground in a camo fold up chair, under a big bush to help break up my figure.

It rained lightly for 15 minutes or so, and then it stopped.  It had been an interesting day with the weather.  The air was thick and humid and there was some fog throughout the woods, coming off the swamp.  Not long after(about 6:10), I saw some movement about 30 yards out in between myself and the swamp.  I got in the right position to support my crossbow and got ready to make a steady shot.  I watched as more of a body became visible and finally saw some antlers.

From there it was game on.  The shakes and a racing heartbeat came over me.  The stuff we all dream about.  The buck was now about 25 yards in front of me.  From out of the brush and through the fog, I see my boy approaching slowly.  The same buck from the week prior in the same spot I had last seen him!  He walked in and stared me down….   I froze for what felt like forever, but was probably 30 seconds.  He broke his stare and then took 2 or 3 steps to his right.  He was quartering to me, only 20 yards out.  I settled myself and took the shot.

He took off to his right and missed a step or 2, then headed straight for the swamp.  I cooled myself down, and went to find the first blood.  I called my brother Jared and told him I’d just shot a nice buck, and asked him how long to wait before I began tracking.  As there were other hunters out on the property, we decided it was best for me to mark the blood trail and get out quietly without screwing up anyone elses’ hunt.  More importantly, we wanted to play it safe, and didn’t want to push the buck in case he was still in earshot.  Jared told me he was coming up from Brighton to help track my buck.  He also had informed my Dad who was now driving up from Grand Haven, both to help me track this buck.  This meant I had to go back to town and keep myself from going crazy until they got here at 10 pm. 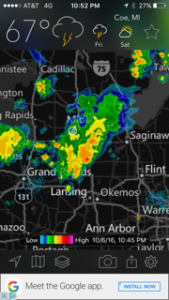 It was about 10:15 pm when I met them both out at the property and I explained everything.  Just about 5 minutes after we got back in and on to the blood trail, the rain started again, and then the lightning.  We were making little progress, the blood we were seeing was not near enough to last through the rain. 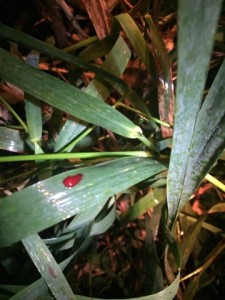 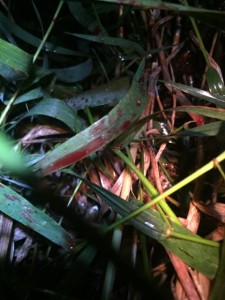 We tracked blood to the edge of the swamp and then we stopped.  Jared had a guy with a deer tracking dog on standby and we decided to call him in.  While we waited in the truck, during the pouring rain, I remember thinking “there’s not much blood, I’m not sure if I made as good of a shot as I “thought”.  I remember getting a sick feeling in my stomach, and doubting my memory of what happened.  I was going to feel really bad if my Dad and Brother just drove all the way up here to help me look for this deer, if we didn’t find it.

Around 11:45 pm, Gordy and his dog Chopper from Bogart’s Whitetail Trackers show up.  We get them back into the spot and all he needed to know was where the deer was standing when I shot it.  Chopper got on the trail, made it to the edge of the swamp in 30 seconds and went right it.  We followed Chopper for about 60 or 70 yards through the swamp and we hear Gordy yell “Dead buck!”.

There he was!!! Right in the spot I had jumped him out of the week before near his bed.  My G5 T3 hit him in front of the shoulder, took out the heart and a lung.  He had been dead for a while. 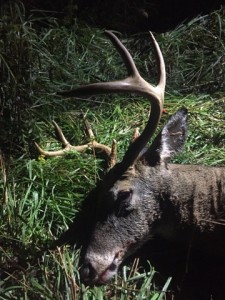 I hadn’t planned on hunting this specific property, as I normally hunt with our good friend Tom just West of town.  Tom, who’s property I planned on hunting this Fall like last Fall, passed away unexpectedly in late September.  For my first hunt of 2016, on a brand new property, and within the first hour, I think I lucked out!  I like to think Tom had something to do with it…

Overall, it was a great night doing what I love with my brother and my dad.  A night I’ll never forget! 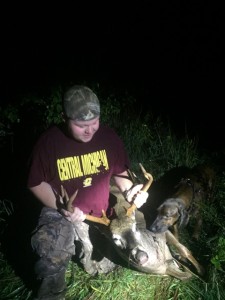 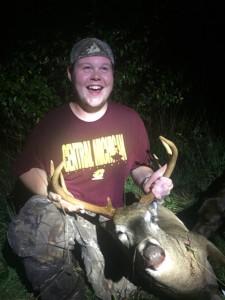 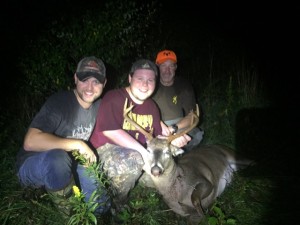 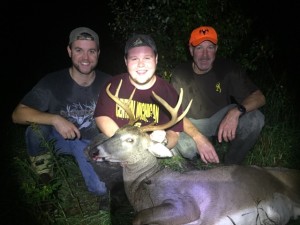 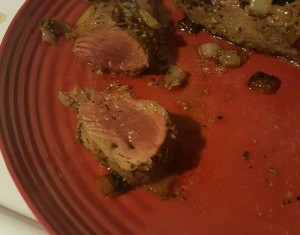